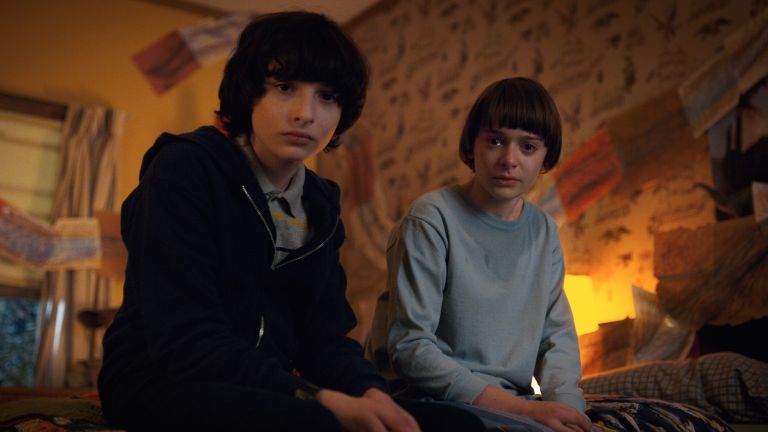 The stars are becoming more and more popular with casting agents by the week – David Harbour is signed up to play Hellboy in the upcoming reboot, Millie Bobby Brown (Eleven) will star in Godzilla: King of the Monsters, and Finn Wolfhard is likely to return to Derry (in flashback) for IT: Chapter 2.

But barring an inter-dimensional cross-rip, we’d expect all the main surviving cast to return for season 3. (Sorry, no Barb. She be dead.)

That includes Charlie Heaton as Jonathan Byers, despite an incident at LAX airport back in October which saw him stopped and sent back to the UK. (Heaton later apologised.)

Ferguson was promoted to main cast status in March 2018. Matt Duffer told Yahoo!: “I love Erica. [Priah] was just a local hire we made in Atlanta. Erica wasn’t even supposed to be in [season two] as much as she was. We fell in love with this girl. I thought she’s very GIF-able, if that’s a word.”

Another, less well-loved, character is strongly tipped to return: Eleven’s “lost” sister Kali, aka 008. “It feels weird to me that we wouldn’t solve [Kali’s] storyline,” Matt Duffer told The Hollywood Reporter. “I would say chances are very high she comes back.” So… Yay?

We know that Dr Brenner (Matthew Modine) is apparently still alive, so it would seem likely that we’ll see more of him in seasons to come, provided Modine is up for it.

Little Women actress (and daughter of Uma Thurman and Ethan Hawke) Maya Hawke will join the cast for season three as an “alternative girl” whose boring day job gets much more interesting when she discovers the town’s dark secret.

There will also be at least three more new major characters joining in on the fun: first up is middle-aged Mayor of Hawkins, Larry Kline, who is described as “a classic, 80s-style slick politician”.

He’ll be played by Cary Elwes, of The Princess Bride and Saw fame.

Millie Bobby Brown, who plays Eleven, is already eyeing up some roles in Hollywood blockbusters. She’s confirmed to star in Godzilla: King of Monsters, which is already in its post-production stages. Charlie Heaton (Jonathan) is starring alongside Game of Thrones‘ Maisie Williams in 2018 film The New Mutants.

With those kind of scheduling conflicts likely to throw a spanner in the works, who knows which actors might end up ditching Hawkins to fry some bigger fish? Demand is going to be high for these stars, especially after Season 2.

Linnea Berthelsen, who plays Kali, revealed to NME that she “doesn’t know yet” if she will return for Season 3, but would “love to,” if asked.

The Duffer Brothers seem keen for her to return. “I would say chances are very high she comes back” Matt told an audience at Vulture Festival LA.

One person we know we will be seeing more of his Lucas’ younger sister, Erica, who stole the show in Season 2. “I love Erica,” Matt Duffer told Yahoo. “Erica wasn’t even supposed to be in [Season 2] as much as she was. We fell in love with this girl.”

“There will definitely be more Erica in Season 3,” Ross Duffer said to Yahoo. “That is the fun thing about the show — you discover stuff as you’re filming. We were able to integrate more of her in, but not as much you want because the story [was] already going. ‘We got to use more Erica’ — that was one of the first things we said in the writers’ room.”

Priah Ferguson, who plays the character, seems well up for it, too. “I hope Erica could partner with Lucas and fight off the Demogorgan with Eleven, Mad Max, and the whole cast,” she told Teen Vogue. I feel like her just snooping around in Lucas’s room – I feel like that’s a little bit of a clue. But maybe not.

Levy has said that they’re not sure if Dr. Owens, played by Paul Reiser will be back just yet. “I don’t have a clear-cut answer for you yet” Levy said to Glamour in January 2018.

Stranger Things Season 3 cast will get a pay rise

According to reports, the stars will get paid a whole lot more for season 3. Winona Ryder and David Harbour will be paid $350,000 an episode and Millie Bobby Brown $300,000.

The child stars Finn Wolfhard, Gaten Matarazzo, Caleb McLaughlin and Noah Schnapp will all get $250,000 per episode, while Natalia Dyer, Charlie Heaton and Joe Keery will pocket roughly $150,000 each.

That Hashtag Show recently announced that there will be at least 3 new characters in the show and gave a bit on info on them:

Mayor Larry Kline: Described as a classic, 80’s style slick politician, Kline is described as pathetic and driven only by his own interests. The studio is looking for a male, 40s-60s, to fill the role.

Bruce: A morally compromised news reporter in his 50s, Bruce was described as outwardly sexist, overweight and bedraggled.

Patricia Brown: Patricia seems to be filing the role of the sweet, neighborhood elder. The studio is looking for a woman in her 70s for the role which will see her spending a lot of time tending to her garden and offering her advice to the neighborhood kids.

An additional new character by the name of Robin, who Netflix described as “an “alternative girl”. That is her literal character description so get ready for some angst.”, will be played by Maya Thurman-Hawke.