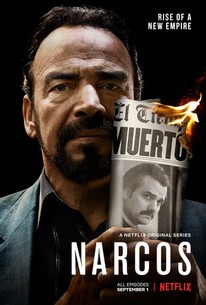 Critics Consensus: Narcos continues to evolve in its third season, drawing on historical details to take viewers on a thoroughly gripping — and unsettlingly timely — journey into darkness.

Now that the bloody hunt for Pablo Escobar has ended, the DEA turns its attention to the richest drug trafficking organization in the world: the Cali Cartel. Led by four powerful godfathers, this cartel operates much differently than Escobar’s, preferring to bribe government officials and keep its violent actions out of the headlines.

Interested in Crypto? Learn all things Crypto on https://mycryptowiki.com

More Subtitles than you can eat. Get the best subtitles at Subtitle.Live

If the characters have changed, Narcos has retained its raffish lustre.

It is one of the great examples of shows that have improved thanks to the opportunity to grow and evolve, and Season 3 continues that journey with an investment in human storytelling.

For all the shake-ups in the cast and in the show’s scope, Narcos is still Narcos.

An old clear-out might prove the show’s smartest decision – opening the gateway for a variety of kingpin personalities, new characters and refined thrills which results in the most engaging season so far.

I find myself admiring Narcos’ overall design all the same, even if the show will never be completely my thing.

It eventually draws you into the family dynamics while ramping up the action.

The idea of a season 3 didn’t feel inviting. But now, those premature doubts are all buried deep into the ground, much like Escobar’s dirty money.

Narcos is highly recommended as a terrific thriller and and a timely political parable.

All signs point to a solid season. I’ll be along for the ride. You should be, too.

**Note: Bookmark this page to Know when more subtitles for this Series becomes available on Netraptor subtitles.

Reviews are culled from: Rotten Tomatoes.