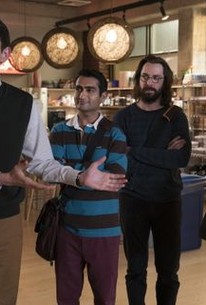 Season premieres on Mar 25, 2018
Pied Piper finally has enough funding for proper offices and new employees, and to bring its peer-to-peer internet to the world — but leveling up introduces a whole new class of obstacles. While Richard struggles to lead a larger team and play with the big dogs, the rest of the team adjusts to new staff, new digs and new anxieties. Meanwhile, Hooli rival Gavin Belson has returned to power, but finds the threat of Pied Piper, and its boldness, hard to shake.

Now that Pied Piper has ample funding and new offices, the pressure to get things right stymies Richard (Thomas Middleditch) and forces him to grow the company in a way he hadn’t planned. A picky Dinesh (Kumail Nanjiani) and Gilfoyle (Martin Starr) question their ability to make good decisions. After returning to Hooli, Gavin (Matt Ross) worries about becoming antiquated.

Panicked by suddenly leading a much larger team, Richard (Thomas Middleditch) finds himself managing a number of small conflicts in his efforts to unite his new employees. Dinesh (Kumail Nanjiani) celebrates a new purchase that Gilfoyle (Martin Starr) looks to spoil. Jian-Yang (Jimmy O. Yang) goes to court. Gavin (Matt Ross) meets pushback over his signature and what it says about him.

Encouraged by Jared (Zach Woods) to strike up a friendship with Dana (Dan Mintz), a like-minded CEO, Richard (Thomas Middleditch) instead finds himself charmed by Dana’s COO (Ben Koldyke), who challenges his loyalty to Gilfoyle (Martin Starr). Facing limited housing options thanks to his impulse purchase, Dinesh (Kumail Nanjiani) searches for a new roommate.

Mike Judge’s HBO comedy can create chaos with the best of them.

In other words, Silicon Valley relies on the same patterns of behavior, storytelling formulas, and comedic sensibilities that it always has – and yes, that includes some juvenile, though admittedly semi-clever jokes.

Silicon Valley is still capable of extracting gut-busting comedy out of its characters’ desperate striving for their piece of the pie.