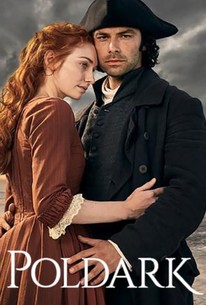 Season premieres on Oct 1, 2017
Season 3 finds Ross and Demelza attempting to repair their relationship, while George Warleggan builds his empire to crush the Poldarks. Elizabeth harbors a dangerous secret, and Dwight is captured during the war with France. Will Ross risk everything to save his friend?

A bit like the average distance between humans and rats, in Poldark you are never far from birth, marriage or death. In this first episode of the third series, there was a full house, the emphasis being very much on death.

Poldark made a welcome return to form, with rather less of the depressing porridge of poverty that sluiced through the last series.

Aidan Turner still a magnetic lead, but Series Three feels like the point where the show puts greater emphasis on activities beyond Ross’s copper-finding strops, and demonstrates the strengths of an excellent — and expanding — ensemble cast.

The honest truth? Can’t wait for next year.

Poldark is, as always, almost bizarrely gripping and entertaining.

Its a tense instalment.

Quite why this absurd Mills & Boon-esque farrago is one of the Beeb’s flagship events every time it comes back around is a mystery, though I suppose it’s solid proof of the value of giving the viewers what they want.

Poldark is just that: televised holiday romance, a teenage fantasy with clotted cream. It’s nice to be — and to have it — back.

It’s an absorbing, atmospheric antidote to the spray tans and gymbots preening all over our screens on summer staples like Love Island and Big Brother.